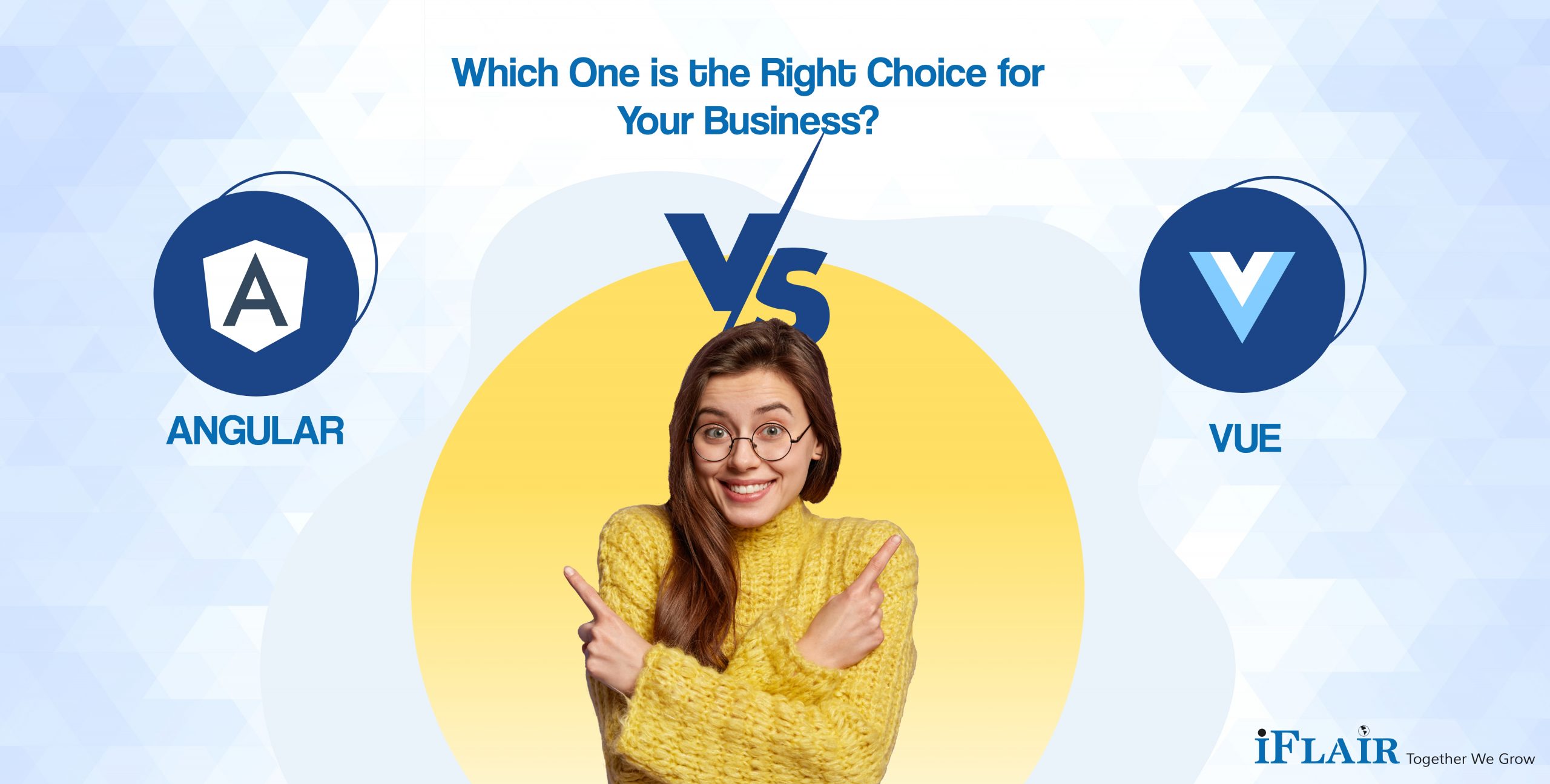 Angular vs Vue: Which One is the Right Choice for Your Business?

It could be difficult to choose the optimal technology stack for your business from all the options accessible. For the past few years, two of the most popular frameworks have been Angular and Vue, both of which make it easy to create modern user interfaces and develop web applications quickly. While each framework has its own strengths and weaknesses, you can use this guide to decide which one to choose.

How Angular.js development is Different from Vue.js?

Enterprises may create scalable web apps with the aid of the typescript-based Angular js development framework. It is an open-source framework, maintained by Google, and used by some of the biggest names in the industry, such as Netflix, PayPal, and Upwork.  Angular is a one-stop front-end framework with included features and libraries that don’t limit its size or performance.

With its reusable code it offers development opportunities across all platforms. It also features dynamic UI binding at a property or object level and two-way data binding as part of its architecture. Although recent versions of Angular now have tree-shaking and AOT compilation features, and so lower the app size significantly, an Angular-based application is not quite as light as the one that was developed with the Vue framework.

Vue is a Lightweight and flexible JavaScript-based framework with many helpful features. Fits the design of applications created with advanced web tools like SPAs and front-end web apps. In this sense, it is versatile and progressive. With its high decoupling, Vue also offers the ability to build customized modules and visual components. By changing the application code without making any core feature changes, you have the opportunity to make iterative updates to the UI.

Furthermore, Vue.js provides the option of server-side rendering, which boosts the performance of pages on the client end and gradually enhances the user experience. There are various web development services in India you can Hire Vue.js Developers in India according to your research.

If you’re trying to decide whether to use Angular or Vue for your web development project, it’s important to consider your needs. Angular is a good choice for large projects with high demands, while Vue is more suited for smaller projects. 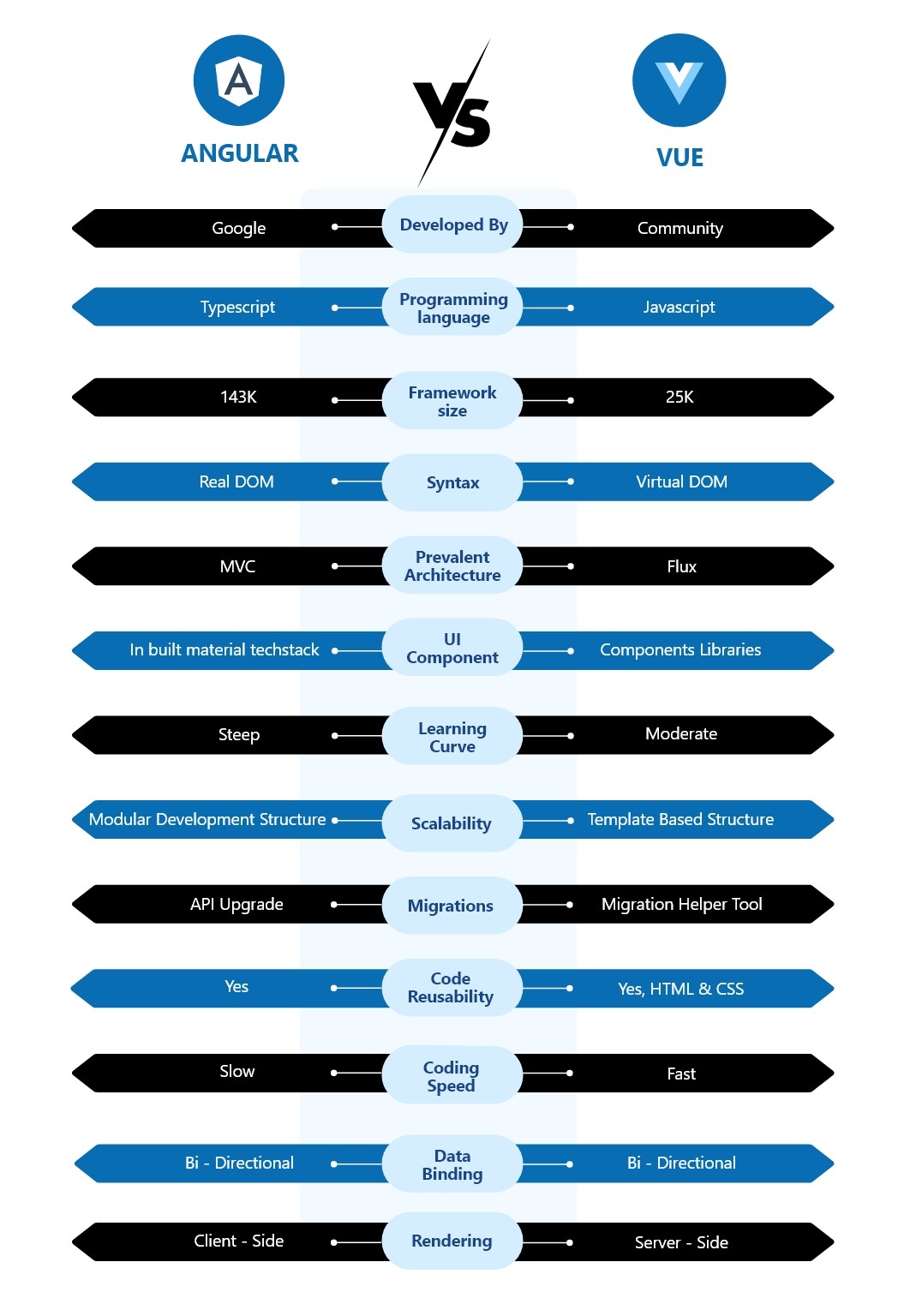 When you do it, make sure to proceed with caution. Leave everything there if you’re not sure whether it’s required.

Image optimization is a requirement if the description fits your website. Optimizing these photos will help them load quicker. Compressing photos, adding alt text and titles, and building an image sitemap are just a few techniques you may use to optimize your photos.

Developers Opinion: Which Framework is the best?

When it comes to web development services, both Angular and Vue.js are popular choices. But how do they score the best against each other? A more lightweight alternative is Vue.js, whereas Angular is a full-featured framework. A major advantage of using Angular is that it has built-in protection from many common threats like XSS attacks. Angular does have some downsides, though: it’s notoriously difficult to learn and use.

Vue’s Ease of use syntax: For those looking for something easier to get started with, then Vue.js may be the right choice. It has an intuitive syntax and lightweight feel, which can make the learning curve much more manageable. Vue.js helps make things easier, since it supports easier integration.

The developers choose both to build a single-page app from scratch and integrate high-end features into the one they’re currently working on. Data binding in Vue is one way that it provides simplicity and speed to UI development. In contrast, Angular requires two-way data binding which is more complicated than what Vue offers.

If you’re looking to hire web development services, you may be wondering whether to choose Angular or Vue.js development. In the world of web application development, both frameworks are popular, but which is the best for your business? Your project’s demands and budget will determine how much you spend.

Web Application Development Services typically use either Angular or Vue to create a user interface that offers scalability and ease of use for web applications.  If you want to develop an e-commerce website, then Vue will help you with displaying product information quickly. Angular is best suited for websites that require intensive data analysis and are heavily dependent on video or graphics rendering.