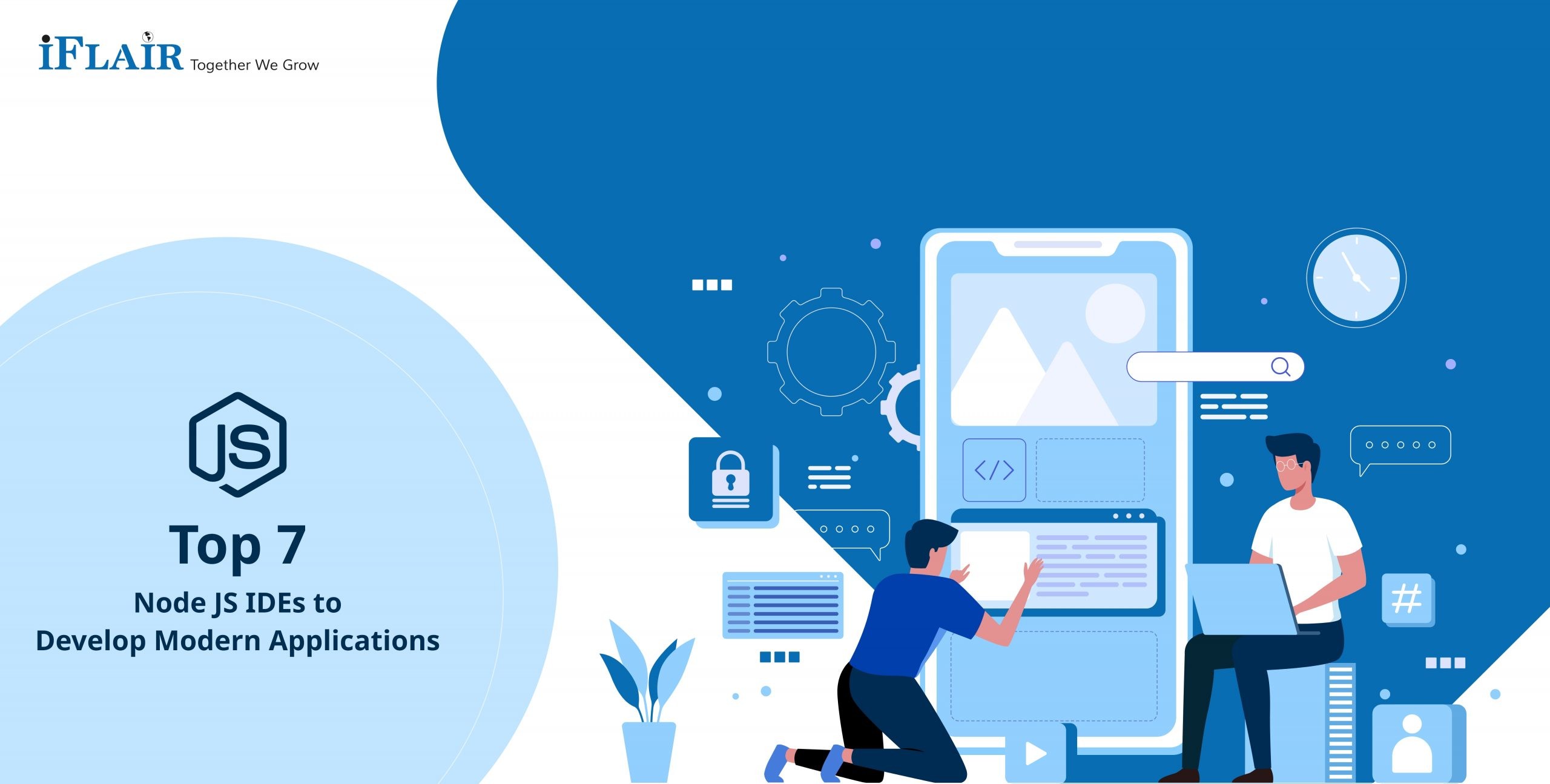 JavaScript development services have been popular for many years and are now one of the most commonly used programming languages. Most developers and coders choose JavaScript when developing a website or creating an app for web-based software. Progressive web application development was inspired by cost-effective front-end development tools like Native Script that exist in JavaScript.

The language has many frameworks; one of the most popular ones is Node.js. This open-source framework was created on the VBScript engine and allows developers to create scalable network applications. It is also used for creating server-side scripting, real-time web applications, and cross-platform development.

Every company needs control over the codes, which requires them to Hire Node.js Developer. This control becomes easier with Node.js as a web application development framework. The tools might assist you in debugging your code and determining the expected result. Node.js allows businesses to create fast, scalable, and lightweight applications. This is excellent for backend technology development. Businesses use IDEs to write clean, crisp, and efficient code. IDEs can do everything conceivable. This blog focuses on the many sorts of Node js IDE so that you may choose the best one for your company without delay.

IDE is an acronym for Integrated Development Environment. With this computer programming software, developers can make use of a variety of features. In most cases, an IDE includes tools for editing, automating builds, and debugging.

The following are the components of most IDE’s:

An IDE’s fundamental characteristic is to provide a single application for all programming activities and offer a core interface of tools to the developer based on their demands. Node.js development has accelerated, become easier, and more cost-effective.

When you support Node.js developers, you’re assisting them in working more efficiently. These IDEs improve efficiency by speeding up development activities, keeping developers informed about the most current best practices and difficulties, and standardizing the web application development process so everyone can participate.

There are many IDEs available on the market today, each with its advantages and disadvantages. To help you choose the best Node JS development IDE for your project, we’ve compiled a list of the top seven.

Eclipse is a cloud-based JavaScript IDE and developer workspace server that “is genuinely next-generation.” Eclipse is the greatest Node.js IDE for large projects with many organizations and individuals working on and monitoring the code because it includes everything you need to support development teams inside an organization or across multiple organizations.

Runtimes, RESTful API servers, and IDEs are included in the Eclipse Che workspace. It also has an SDK with which you may develop plugins and assemblies. Key binding and refactoring make it ideal for NodeJS developers. Eclipse is well-known because it may be readily used as a technology stack for all pre-installed debugger modules, and it makes Node.js app development easier. As a consequence, Node.js Development Services are in high demand.

JetBrains launched IntelliJ IDEA as a new IDE with the aid of Java and Kotlin. This is the most innovative NodeJS IDEs in the community.

IntelliJ IDEA is not your typical integrated development environment (IDE). It allows you to compile, execute, and debug code from the IDE just as other IDEs do. Furthermore, we understand that there is a predictive technology that predicts the developer’s intended action and completes the operation automatically. This IntelliJ IDEA plugin includes code completion and other features for your next NodeJS project, such as syntax highlighting and intelligent code completion.

It’s a cloud-based IDE for node js that’s free to use. It’s similar to the previous concept in the list, being entirely cloud-based. The node js application may be developed using it at any time.

There are a lot of PHP applications. This is an excellent binding editor with lots of useful features. The image editor comes with some intriguing extras. A Node.js development company may find this to be so.

Atom is a code writing and editing program. Atom users can also develop extensions for the program. Packages are additional features that atomists may install to spice up their experience with the app. The default interface theme of Atom is called “Atom Dark,” but other themes can be downloaded from the website or installed via the command line.The functionality of Atom can be extended by installing packages that add new features and modify existing ones. For example, there are packages to add support for language grammars that are not natively supported by Atom and packages that improve existing language support.”

The Sublime Text editor supports plugins and is cross-platform. Its Python API is available on all platforms. It includes a package manager, supports various programming and markup languages, and is modifiable via themes and plugins. Sublime Text has a minimalist user interface, which can be customized further through themes.

Use the great sublime Text to your advantage. You may always change between projects. For comparing, get the split code. Furthermore, make the editor more user-friendly according to your preferences. Make a lot of similar actions. All of this can make writing code a breeze for you.

In addition to these project types, Visual Studio includes a project type for developing SharePoint solutions. Solutions developed in Visual Studio can be deployed to on-premises servers or hosted services such as Azure.

All major operating systems, including MacOS, Windows, and Linux, are supported by Visual Studio Code, a cross-platform JavaScript and Node.js development environment.

WebMatrix is a great IDE for NodeJS applications. This cloud-based development environment was developed by Microsoft, so there’s no doubt about its dependability or security. Because this program was designed by Microsoft for web developers specifically, it is both safe and secure.

Although WebMatrix was built by Microsoft for Windows developers, it can also be used by Mac and Linux developers. WebMatrix’s popularity among web developers is due to this feature. 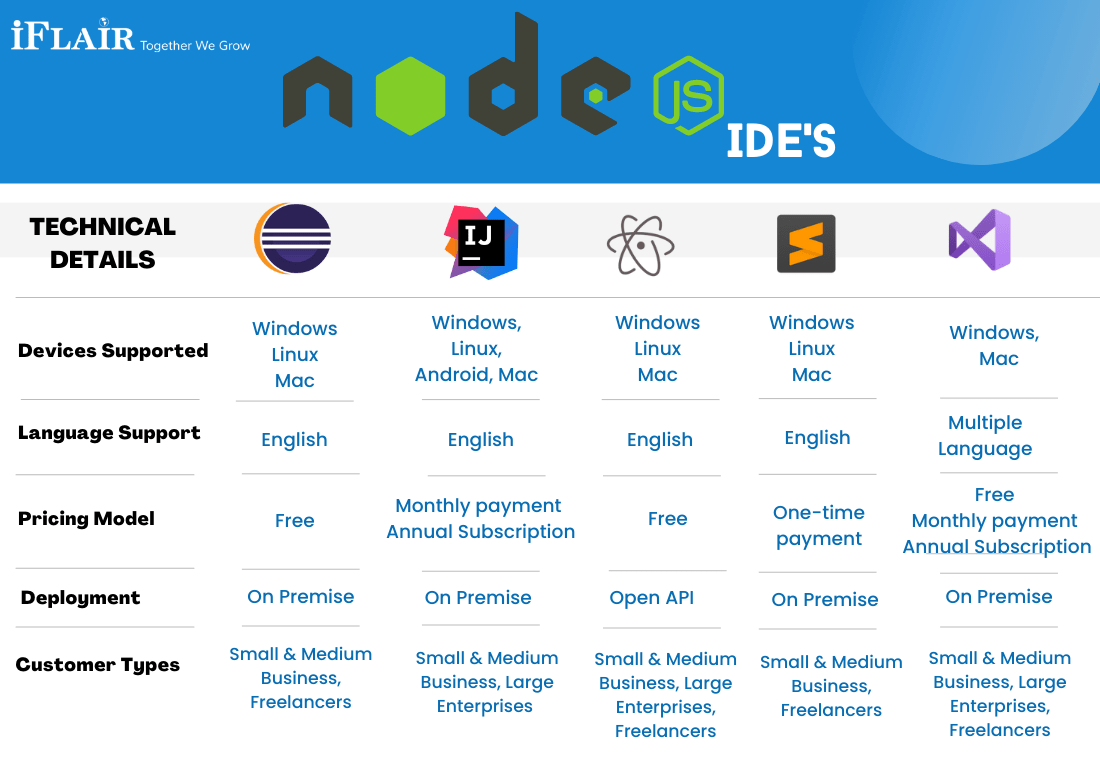 Node.js App Development is a popular framework for backend technology. Businesses use IDEs to write clean, crisp, and efficient code. Your business can benefit from the best app development services when you hire Node.js Developer.

The main advantage of using an Integrated Development Environment, or IDE, is that they allow you to create lightweight applications. From this one, we attempted to provide several alternatives to pick from while developing a NodeJS application. Myriad choices may confuse you, but we are happy to assist you with this list of IDEs. This will assist you in recognizing all the capabilities required for developing your custom software and resolving any issues you may have.